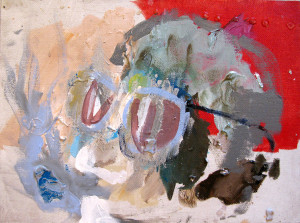 Greg Smith is a self-taught visual artist from Woodstock, Ontario, currently living in Toronto. He made some furtive gestures towards visual arts in high school and even enrolled in George Brown College in Toronto for graphic design. He failed to finish his first year. He decided to follow his passion for music instead, touring Canada and the world with various artists. In 2004, however, Greg began sketching compelling scenes while touring his band, The Weakerthans. When he returned home, he used those sketches and his memories as the inspiration for a collection of paintings, and has now been exhibiting for the last five years.

Smith’s early work was informed by necessity and a fascination with our Western culture of obsolescence, crafting his first pieces on off-cuts from lumber stores and wood he found in the trash. With the woody grain so rich in texture, the lumber then informed his approach to design and execution. He still paints predominantly on wood, though weight has become an issue with his larger pieces so he has begun experimenting with canvas.

These economic themes are also represented in Smith’s colour choices, repurposing leftover acrylic house paint and off-tints from local paint shops. He makes use of anything at hand in their application, such as brushes, knives, cloth, spray bottles and his hands. Effects culled from the watercolour paradigm (e.g. dry brush, scratching and scarring, underpainting) are also employed.

Informed by his music, Smith’s paintings reflect a passion for utilizing a given space in order to communicate an image emotionally, exploring single themes through multiple paintings. Recently, there is an emphasis on a supplicated point of view. Surreal colour choices are informed by the energy and emotion of the remembered event rather than scientific accuracy, and though he still occasionally refers to sketches or photos, his primary concern is painting from memory.

Says Smith: “I feel it is gossamer, impressionable and fleeting; organic and shifting and often imperfect. Images created from memory are imbued with the specific experiences of both the artist and the audience. I find the uncertainty of recall dynamic humbling, stimulating and communal, adding depth, unbalance and uncertainty to both the art and the audience. The fantastical nature of the mundane, tempered by the whimsical baggage of experience, is my primary artistic concern to date.”

Smith has also created album covers, and was nominated in 2008 for a West Coast Music Award for Best Album Art for The Weakerthans’ Live at the Burton Cummings Theatre.

His most recent work is concerned with plant and animal tableaus.